Home > News > Microsoft Chooses Advania as Partner of the Year 2019

Microsoft Chooses Advania as Partner of the Year 2019

Advania has received honours from Microsoft Iceland for outstanding collaboration. The award marks the second year in a row Advania has been named Partner of the Year. Advania Marketplace also received a special award from Microsoft. 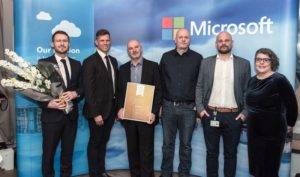 Microsoft Iceland recently announced its 2019 Partner of the Year award. Advania received the honours for a second consecutive year. According to a statement from Microsoft Iceland, Advania has excelled in information technology solutions, innovation and the implementation of Microsoft solutions. The two companies share an operational focus which emphasises cloud services, increased automation and efficient business systems. One of the fruits of the collaboration is Advania‘s PMAx solution getting published on AppSource, Microsoft‘s international marketplace for specialised solutions.

Special honours were awarded to Advania Marketplace, a centralised web portal which enables customers to buy and provision various licenses and services. According to Microsoft Iceland the automation of software purchases and license provisioning represented a paradigm shift for the business model in the Icelandic IT sector. By initiating this project, Advania has taken great leap into the future.

Last week we held the first ‘in person’ DynamicsPact CEO Conference since before the pandemic. Our members travelled from all four corners of the globe to meet in the beautiful Vilamoura in Portugal. Our venue, the Crown Plaza Hotel, was…

We Speak Our Customers Language

When it comes to delivering a successful project, we must understand our customers language. The deep understanding of our customers business and their requirements is backed by the professionalism and value we bring to every project we embark on.  …